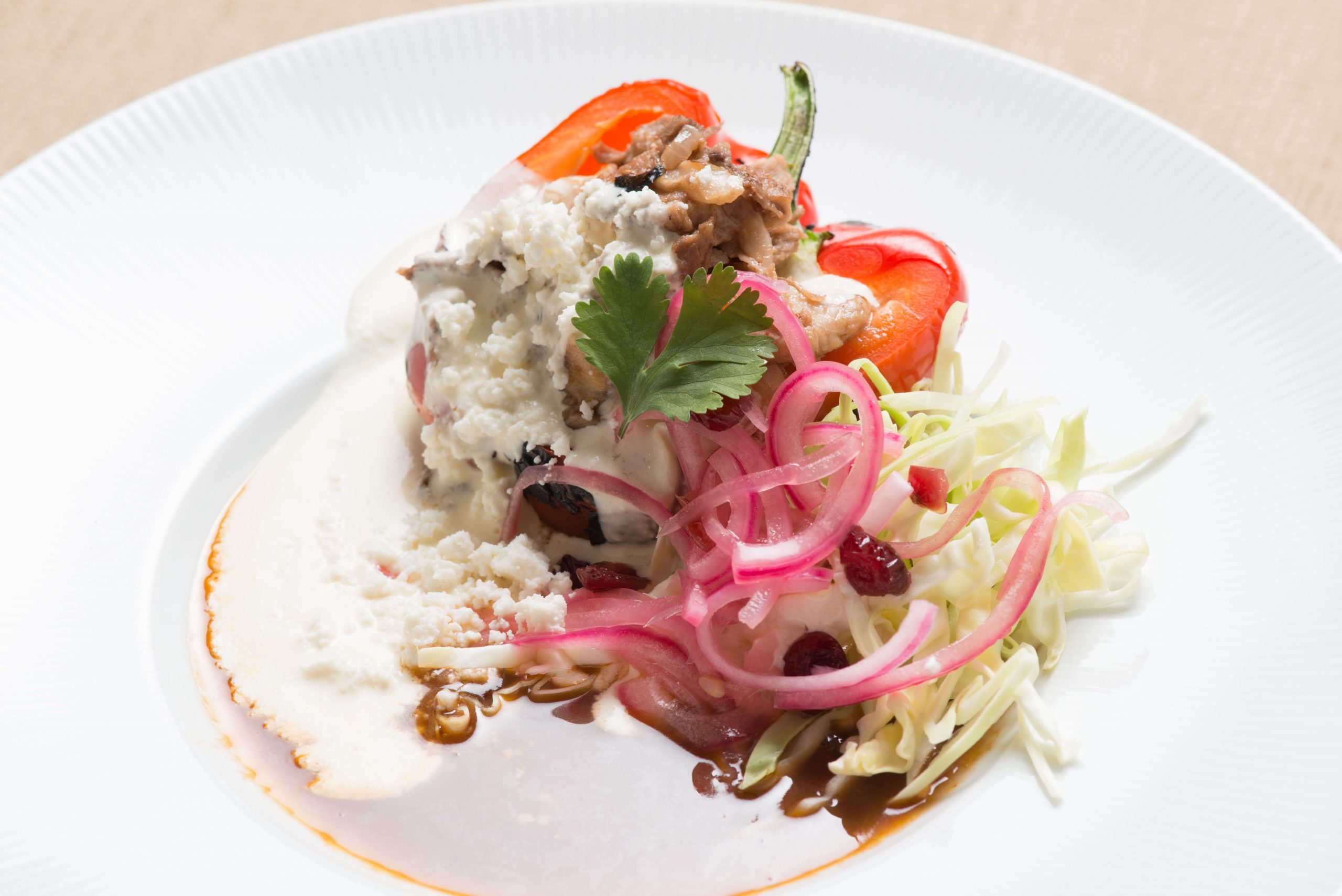 Meat Preparation:
Preheat oven to 350 degrees. Dry the pieces of pork with a towel, and season liberally with salt and pepper. In the braising vessel, sear the pork in canola oil. Remove the pork from the pan once browned on all sides.

Mix together the cranberry juice and pork stock and add to the braising vessel. Stir in the adobo sauce and whole chipotle pepper. Bring the liquid to a simmer, uncovered, and allow to cook for 20 minutes on the stovetop. Remove half of the braising liquid, and set aside for use later. Add the pork back to the pan.  Cover the pan tightly with foil and place in a 350 degree oven..

After 20 minutes, lower the heat of the oven to 275 degrees.
Roast the peppers over an open flame until their skin puckers, singes and the flesh feels toothsome. Allow the peppers to cool slightly before cutting each in half lengthwise and removing the inner seeds and membranes. After the pork has been in the oven for another 20 minutes, remove it from the oven and flip each piece. Return to the oven, covered, for 40 minutes to an hour. (total braising time is around 1 hour 20 minutes to 1 hour 40 minutes)

Crema Preparation:
Add the crema, queso and milk into the body of a Vitamix, and blend on low to medium speed until silken

Pickling Preparation:
Warm the water, balsamic, and vinegar in a medium saucepan and add the salt and sugar, and stir to dissolve. Bring to a boil. Place the red onion and cranberries in a bowl, and pour the hot pickling liquid over. Stir to ensure that all of the onion and berries are submerged.

Allow to sit until the cranberries are slightly rehydrated and the onions are softened. To assemble, take a half of a roasted pepper and stuff the cavity with 4 ounces of the shredded pork mixture.

Spoon a bit of the braise gravy on the base of a plate. Create a bed of shredded cabbage at the edge of the braising liquid. Nestle the stuffed pepper next to the cabbage. With a serving spoon nappe the crema over the pepper.

Place a generous amount of queso fresco right over the crema and pepper. Next to the pork, on the cabbage, place a forkful of the pickled onions, and a few cilantro leaves.